One of the most critical parts of an onsite wastewater treatment system is the development of a healthy biomat, yet biomat is not something that can be purchased from a distributor. So, what exactly is the biomat and how does it form in a drainfield? 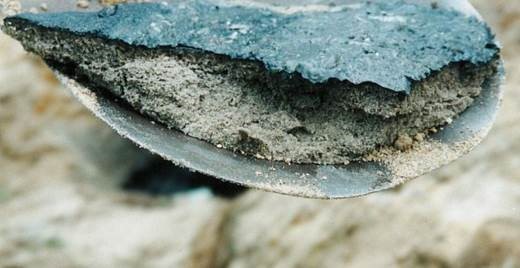 Often referred to as “bugs” and short for biological material, the biomat is in fact a layer of both living and dead anaerobic bacteria, accompanied by effluent solids, mineral precipitates, and the byproducts of decomposition. These bacteria already exist in the soils surrounding the drainfield and some in the effluent; however, they use the effluent as a food source to grow and alter their environment. Now, the biomat does not just develop instantaneously. Biomat takes up to 36 months to fully mature and spread throughout the system. As the biomat grows, the anaerobic bacteria inhabiting it will digest organic matter suspended in the effluent, providing treatment as it percolates through the soil, and at the same time will create a black, jelly-like layer thus reducing the soils permeability that helps distribute the wastewater evenly throughout the length of the drainfield.

Under a consistent effluent loading rate, the bacteria in the biomat combined with other microbes in the soil will constantly fluctuate, both growing and decomposing each other which allows the onsite wastewater treatment system to passively treat the wastewater with little to no maintenance. However, over time or instances of abuse, the loading rate may begin to exceed the infiltration rate and lead to ponding, a normal progression of the system. If the system is abused or reached its life expectancy it will result in a backup of the system. Remember that the biomat consists of living and dead anaerobic bacteria that use effluent as a food source, but luckily, there is always a bigger fish. By introducing aerobic bacteria into the drainfield, the biomat can be digested and diminished to allow the soil voids to open and increase the infiltration rate. The Aquaworx Remediator does this by utilizing high levels of dissolved oxygen to promote aerobic bacteria growth which will digest solids in both the septic tank and the drainfield, providing results in as little as two weeks.

This does not mean that just because a failing drainfield can be saved that the system should not be taken care of in the first place. It is still important to pump the septic tank every three to five years, avoid hydraulic overload, and avoid flushing products or chemicals that could harm the bacteria in your septic system. Doing so will ensure that the bacteria in your drainfield are happy, healthy, and most importantly, properly treating effluent.

Kevin joined Infiltrator Water Technologies in 2021 as an Environmental Engineer after graduating with his B.S. in Civil Engineering from Western New England University. Prior to joining Infiltrator Kevin worked with a surveying crew allowing him to gain experience on septic system installation sites. Today he works with engineers and installers to design and draft residential and commercial septic systems and provide technical support.